"What's New With The Employment Act?" by HaKita 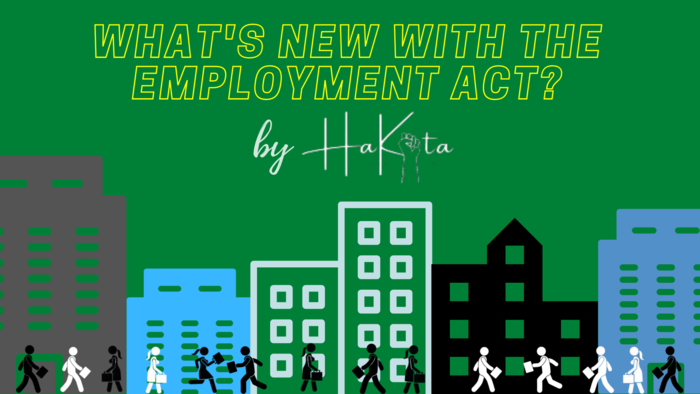 “What’s New With The Employment Act?”

“Keep in the know and be interested in knowing”
Zi Han, panellist of THURights with HaKita

The main legislation governing employment law in Malaysia is the Employment Act 1955 (‘EA’), alongside other legislations such as the National Minimum Wage Act 1998, the Employees Social Security Act 1969, Employees Provident Fund Act 1951, etc. Due to concerns and gaps in relation to the protection afforded to employees, the Employment (Amendment) Act 2022 (‘EAA’) was gazetted and now slated to come into force on the 1st of January 2023, as announced by the Minister of Human Resources, Datuk Seri Saravanan Murugan. The EAA now introduces provisions aiming to safeguard the employees whom make up more than 10 million of the workforce.

Employment (Amendment) Act 2022 & what has been changed?

Among the significant amendments, the EAA has been widened to include any person who has entered into a contract of service i.e. all employees irrespective of wage. Prior to the amendments, the term ‘employee’ was defined under the First Schedule of EA to merely include a person that enters into a contract of service with wages not exceeding RM2,000 per month. With the amendment in place, employers now are compelled by law to ensure that their employment contracts comply with the minimum standards set under the EA and stretches to include employees with wages above RM2,000 or working as an independent contractor. Under the EAA, any employment terms that are less favourable to the employee can be rendered void and unenforceable.

The category of employee includes:

(i) labour as an artisan or apprentice;

(ii) operation or maintenance of any mechanically propelled vehicle for transportation of passengers or goods or for commercial purposes;

(iii) employees who supervises or oversees other employees of manual labour employed by the same employer;

The presumption can be invoked when the employee establishes any one of the limbs prescribed under Section 101C of the EAA and the presumption would remain in effect until the contrary is proved. This is definitely a huge win for gig workers such as Instagram influencers, hire drivers, photographers and delivery partners as it guarantees gig workers the same rights as an employee with no requirement for a written contract to be drawn. Before the insertion of this section, independent contractors who are contracted for a period of time for a certain amount of money would possess drastically different rights and protection under the law as compared to an employee.

Given the said change of working environment, the new EA has also reduced the maximum working hours from 48 hours to 45 hours, and where the employees work over the 45th hour mark, they are entitled to overtime payments. This is in line with international labour standards and regulations.

In addition to the above, the EA had introduced paid paternity leave and an increase of paid maternity leave. This is also another welcome change to match international labour standards and ensure that working mothers have sufficient time to recuperate and care for their child. Mothers are now provided with 98 days of maternity leave as opposed to the pre-amendment that merely provides 60 days of maternity leave. On the same note, EAA now celebrates for a more gender equal treatment by providing working fathers a 7-day paid paternity leave under Section 60FA of the EA for each confinement, up to a limit of 5 confinements. The paid paternity leaves have certain conditions attached, first, the employee is married to the mother, is under the same employer for at least 12 months and notifies the employer as early as possible or 30 days from the expected confinement date. While 7 days may not be enough, however, we must celebrate that this amendment positively recognises fatherhood and fathers’ contribution in a family and brings Malaysia a step further in achieving an all-inclusive society.

Last but not least, pregnant women employees has been given a protection from being terminated under the EA. Section 41A of EA, the newly inserted provision makes it an offence when the employer terminates or gives the termination of service notice to the female pregnant employee or in situations, she is suffering from illness due to her pregnancy unless there is a wilful breach of condition of the contract of service, misconduct or the employer’s business had come to an end.

What can you do when your rights as an employee are violated?

Zi Han, one of our panellists for THURights with HaKita and an Employment and Dispute Resolution lawyer had shared some limelight on handling situations where one's rights under EA are violated. In such a situation, he advised that the first step to be taken is to refer back to the employment contract and the EA. Second, to inform the company of such violation and the action and/or decision of the company had contradicted the statutory law.

In situations where the company still chooses to ignore the employee’s plea, the employee can exercise his/her rights by reporting the incident to the governmental bodies such as Jabatan Tenaga Kerja, Industrial Relation Department etc, depending on the issue at hand. This would cater to all crowds with zero costs. However, if the employee was blamed for misconduct such as stealing the company’s money or submitted excessive claims, they should seek legal assistance from lawyers.

Though such a response is a good indication that Malaysians are aware of one of the rights they possess, we should still continue to raise awareness on employees’ rights as echoed by both Zi Han and Khaleeda binti Ahmad Anuar, a medical lab technologist and the other panellist for THURights with HaKita. This is to prevent oneself from being subjected to exploitation. When the employers and employees are equally informed of their rights, it would

produce a balanced environment with many unnecessary incidents being avoided and cause the development of human relations and workforce to move forward as emphasised by Zi Han.

Khaleeda further added the importance of fostering conversation and normalising having the conversation on pays, leaves etc in order to raise and spread awareness in the workspace as it would ultimately affect the employees themselves in the long run. The education aspect was also stressed upon by Khaleeda where briefings should be conducted by government bodies to employees on their rights when they entered into the workforce to avoid employers from having the upper-hand to play with the entitlement they have. It was also frowned upon for employers to insert the clause in employment contracts prohibiting the employees from sharing the details of their contracts to peers or other employees from different companies working in the same profession as mentioned by both our panellist.

Other than that, the employees themselves must also take the initiative to learn their rights, in order to play a part in combating the issue of exploitation of workmanship in the workforce. According to Zi Han, we are unable to incentivize people from being aware of their rights, they themselves must play their part of being interested in the rights and wrongs.

Ultimately, it goes back to the very basic of being aware of your rights and spreading the awareness to the people around you.