"Sexual Harassment in the Workplace" by HaKita 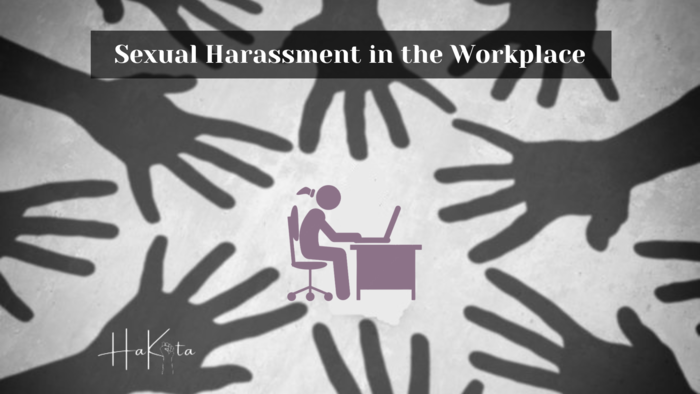 SEXUAL HARASSMENT IN THE WORKPLACE

As a starting point, sexual harassment is wide enough to encompass any unwanted conduct of a sexual nature whether verbal, non-verbal, visual, gestural or physical, directed at a person which is offensive, humiliating or a threat to their well-being. Prior to the amendment of the Employment Act 1955 in 2012, sexual harassment was not governed by any laws and this means that the unwanted conduct was not a crime until the 2012 amendment. Fortunately, with the progression of humanitarian and social values, the definition of sexual harassment now applies in gender neutral form and includes incidents occurring in and out of an individual’s employment.

Following the development of relevant provisions, Malaysia has faced its first victory in establishing the landmark decision pronouncing the tort of sexual harassment. This can be gleaned in the case of Mohd Ridzwan Abdul Razak v Asmah Hj Mohd Nor [2016] 4 MLJ 282 where the Federal Court affirmed the High Court’s decision in awarding damages to a victim of sexual harassment in the workplace.

Briefly, the case was brought by the Plaintiff against the Defendant, who were both employees of Lembaga Tabung Haji. The Defendant lodged an internal complaint to the CEO claiming sexual harassment by the Plaintiff based on his allegedly repeated vulgar remarks, dirty jokes of a sexual nature, use of rude and uncouth words in emails and repeated offers to make the Defendant his second wife. Following the complaint, the Company initiated an inquiry but found that there was insufficient evidence to warrant disciplinary action against the Plaintiff. However, the Plaintiff was subsequently transferred to another Division of the Company.

The Plaintiff was aggrieved by the complaint and felt that it affected his reputation and standing as a Muslim and as a member of the senior management of the company. He sought disciplinary action against the Defendant for submitting a claim of sexual harassment based on no evidence. Despite his request, the company took no such disciplinary action. The Plaintiff responded by bringing a claim for defamation against the Defendant. That prompted the Defendant to respond by filing in her defence the sexual harassment allegation as a counterclaim against the Plaintiff.

The High Court found against the Plaintiff and allowed the Defendant’s counterclaim for sexual harassment. That decision has subsequently been approved by the Federal Court which ordered general and aggravated damages for the tort of sexual harassment.

Hereinafter, the Federal Court’s decision provides an avenue for victims of sexual harassment to seek redress and remedy in the civil courts.

Nevertheless, the protection towards sexual harassment should not stop at the stage of establishing the tort of sexual harassment. The growing concern and need of requiring a specific legislation was echoed by Vilasani Vijandran, Co-Chair of the Gender, Equality and Diversity Committee of the Kuala Lumpur Bar Committee in HaKita’s monthly webinar imitative – THURights with HaKita. Based on a survey conducted by YouGov in 2019, 24% of sexual harassment happens at the workplace, 22% at schools and universities, 23% at public transportation and 12-15% at shopping malls. These statistics are critically alarming as it shows that people are exposed to sexual harassment other than in workplace scenarios and has to be addressed through a specific legislation, and this prompted the introduction of Anti-Sexual Harassment Bill 2021 (“The Bill”)

The much awaited Anti-Sexual Harassment Bill 2021 was passed on the 20th of July 2022 in the Dewan Rakyat (House of Representatives), pending approval from the Dewan Negara (the Senate) and the royal assent before being gazetted at law. The Bill was expected to be enforced in phases starting with educating the public about the Bill. Materially, the Bill allows a sexual harassment survivor to seek compensation or damages from the perpetrator by making a complaint to the Tribunal of Anti-Sexual Harassment. The extended protection towards a victim and a complainant includes conducted hearing behind closed doors, being a gender neutral law, imposing a rather high penalty of RM50,000.00 for companies which fail to act against incidents of sexual harassment in the workplace and those found to have committed sexual harassment may end up paying their victims compensation of up to RM250,000.00 or be jailed for two years.

B. The History of the Anti-Sexual Harassment Bill 2021

Prior to the introduction and passing of the Anti-Sexual Harassment Bill 2021, the main legislation governing sexual harassment includes Penal Code and the Multimedia and Communications Act 1998. We have also touched on the Federal Court case of Mohd Ridzwan Abdul Razak (supra) on the tort of sexual harassment.

The push for the Bill originated from cooperative efforts brought by non-governmental organisations (“NGOs”). The NGOs that were prominent in the making of the Bill were All Women’s Lawyers, Joint Action Group for Gender Equality (“JAG”), and the Anti-Sexual Harassment advocacy group which comprised of 14 NGOs. With their efforts, the Bill was passed after 3 decades of hard work.

According to another panellist at THURights with HaKita, Jernell Tan, Information & Communications Officer at All Women’s Action Society (“AWAM”), its organisation had actively conducted campaigns to have the Anti-Sexual Harassment Bill tabled in Parliament. In their campaign, AWAM had obtained signatures from the public to support a petition for the Anti-Sexual Harassment Bill and their efforts includes going to the Parliament to lobby support from the Members of Parliament.

AWAM had also conducted policy advocacy by engaging with the Ministry of Women. In 2019, AWAM was a part of the taskforce to amend the Bill under the Ministry of Women. AWAM with JAG and the Anti – Sexual Harassment Advocacy Group had lobbied the Government to make amendments to the Bill after it was passed in by the Parliament.

Besides that, AWAM had engaged with very high stakeholders such as the Attorney General Chambers, YB Dato’ Sri Rina Harun, the Parliament Special Select Committee on Women and Children’s Affairs and Social Development to push for the Bill to be amended. However, they did not manage to have the Bill amended but they did to get their concerns across to the Government.

Under the Anti-Sexual Harassment Bill 2021, sexual harassment was given an extended definition, that is “any unwanted conduct of a sexual nature in any form whether verbal or non-verbal, visual, gestural, or physical directed towards a person which is reasonably offensive or humiliating or is a threat to his well-being.” According to Vila, the Bill has provided a quite extensive definition of sexual harassment where it includes sexual harassment that happens outside of workplaces.

Psychological abuse can happen wherein a person asks an individual to go out on a date and that person refuses to comply with the request. The perpetrator would continuously push his/her request until the victim complies with it. This action would have violated the boundaries of the victim and hence being a psychological harassment.

Under the Anti-Sexual Harassment Bill 2021, there are several key features which are, the establishment of a tribunal to receive complaints on sexual harassment, powers of the tribunal to grant awards, the awards and compensations for the victims, and the procedure to make an appeal.

According to Jernell, the passing of the Bill was a positive action towards eradicating sexual harassment in Malaysia. However, there were still some aspects of the Bill that could be improvised. One of it was the definition of sexual harassment “any unwanted conduct of a sexual nature in any form whether verbal or non-verbal, visual, gestural, or physical directed towards a person.”

Jernell was suggesting that the phrase “directed towards a person” should be replaced with “against a person” because sexual harassment can happen indirectly. There is a possibility that the perpetrator makes a sexual joke in a room which does not direct to any person, but it makes the people in the room feel intimidated.

Besides that, the definition of sexual harassment should also include when the perpetrator creates an environment that is hostile and intimidating to the victim. This is based on the incident that happened to Ain Husniza where a class teacher had made a rape joke to the students in the classroom.

Educational institutions can provide a mechanism where survivors can file for a report of sexual harassment. After receiving the report, the institution must handle the cases effectively and investigate the incident within a reasonable time. The institution should not delay or be unresponsive in handling the cases. This would hinder the victims from seeking redress from the perpetrator.

Unfortunately, this is far from the reality. Based on testimonies, there are many institutions that do not have a complaint mechanism. If there is such a mechanism, no action would be taken against the perpetrator, and this has been one of the reasons for not reporting sexual harassment cases.

In order to empower the public on sexual harassment, there should be more advocacy and an open discussion on this issue. Vila stressed on talking about sexual harassment honestly and candidly.

In this regard, and being part of HaKita’s monthly Action Week, we have put up a series of polls and questions to ask our audiences. The first part of our post entails the types of sexual harassment and statistics of the issue, in the second part, followers were invited to vote on the following questions:

The responses were shockingly devastating. In respond to the first question, 100% of our respondents voted “No”. For the second question, we received a number of unpleasant experiences from our respondents, for completeness, we would reproduce a few in verbatim:

Finally, in regards to the third question, their responses ranged from 2 to 10. From the above engagements, it is clear that sexual harassment can occur any day and anywhere, many were under the jaws of such disturbing conduct and it is therefore necessary to learn how to protect ourselves and the ones around us. Cases of sexual harassment should also be taken seriously when victims share about it to a friend, family, or a lawyer. Most importantly, any complaints by victims should be listened to actively and without any judgement.

For survivors, they should also seek help from organization that works in this aspect and lawyers that have dedicated their time to protect the victims in cases of sexual harassment. For example, AWAM has a helpline and free counselling services for survivors who don’t want to seek redress from the perpetrator.

Lastly, we must end the sexual harassment culture that has been a part of the rape culture. Rape jokes are the most common examples of a verbal sexual harassment. According to Jernell, rape jokes would allow the harasser to cross the boundaries and disrespect the victim. It also gives the permission for people to sexualize and objectify women that would allow them to do anything to a woman. If we don’t address the rape jokes, we won’t be able to eradicate the other types of gender-based violence such as rape and domestic violence. Therefore, it’s crucial that we tell our friends, families and the pubic that rape joke is not acceptable and it’s important to be respectful towards women.

In conclusion, while the tabulation of the Anti-Sexual Harassment Bill 2021 made a huge step, there are still gaps in the Bill and room for improvement. At the end of the day, it is everyone of you to help stand for the elimination of sexual harassment.