"Section 75A Directors, Do You Know Your Liabilities?" by Halim Hong & Quek 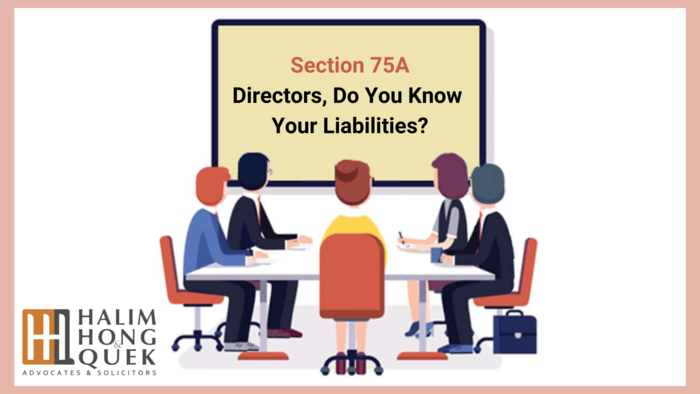 Director’s liability under Section 75A of the Income Tax Act 1967 has always been under the close scrutiny of the Inland Revenue Board of Malaysia (“IRB”). Many directors do not appear to know that they are being exposed to such liability until they are being slapped with a notice of assessment and/or being named as one of the defendants.

Shareholders’ dispute, sleeping partners, the operation-focus-only director and the ‘on-paper’ directors and shareholders, poor corporate governance are, amongst others, the factors that often contributed towards the exposure to such liability, let alone exposure to other liabilities.

Director under Section 75A of the Income Tax Act 1967 means any person who:

(a) is occupying the position of director (by whatever name called), including any person who is concerned in the management of the company’s business; and

(b) is, either on his own or with one or more associates within the meaning of subsection 139(7), the owner of, or able directly or through the medium of other companies or by any other indirect means to control, not less than twenty per cent of the ordinary share capital of the company (“ordinary share capital” here having the same meaning as in the definition of “director” in section 2).

(hereinafter referred to as “Section 75A Director”).

The summary of all these three cases above is as follows:

(a) After an assessment is served on the taxpayer, the tax payable under the assessment becomes due and payable, whether or not that person appeals against the assessment;
(b) Any plea that the tax sought to be recovered is excessive, incorrectly assessed, under appeal or incorrectly increase shall not be entertained;
(c) The production of a certificate signed by the Director Section 75A Directors, Do You Know Your Liabilities? 15 General of the Inland Revenue shall be sufficient evidence of the amount so due and sufficient authority for the court to give judgement for that amount;
(d) The service of the assessment via ordinary post is valid so long it is being served to the registered office’s address, last known address or to any person authorized by it to accept service of process; and
(e) A pending tax appeal before the Special Commissioners of Income tax does nothing to affect the IRB’s application for summary judgment.

These cases merely reiterate the current state of laws and there is no new development in relation to Section 75A of the Income Tax Act 1967 as of now. That said, many Section 75A Directors remain unaware of such liability.

What can be seen from these cases is that the IRB is closely monitoring the Section 75A Directors with the objective to hold the directors jointly liable for the companies’ tax liabilities. The legal actions taken by the IRB are no longer confined to commencing civil recovery proceedings and imposing travel restriction. In Sayyid Shah Abdullah (supra), the IRB lodged a caveat against the director’s private property (i.e. a land).

As such, Section 75A Directors are advised to conduct a review of their direct and indirect shareholdings in the companies and group of companies in a periodical manner. Further, no directors should turn a blind eye to the tax affairs of a company as ultimately, the directors could eventually be held liable for the company’s tax liabilities.