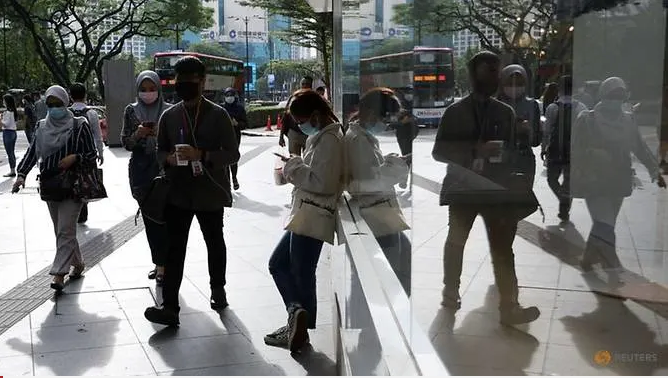 KUALA LUMPUR: More than 750,000 employees in the Klang Valley, Sabah and Labuan have been ordered to work from home effective Thursday (Oct 22), in line with the conditional movement control order (CMCO) enforced in these areas.

In a statement on Wednesday, Minister for International Trade and Industry Mohamed Azmin Ali explained that the number of employees in the manufacturing, construction and services sector in Sabah, Selangor and federal territories of Labuan, Kuala Lumpur and Putrajaya totalled 3.1 million.

"Taking the shared responsibility to protect the health of the people and workers, MITI (Ministry of International Trade and Industry) will immediately implement the MKN's (National Security Council) decision for industry players to introduce the work from home policy for management and supervisory staff," Mr Mohamed Azmin said.

This is to reduce the risk of the virus spreading, he added.

However, the minister also said in the statement that having taken the industries' needs into consideration, the ministry would allow a maximum 10 per cent of the management staff to work in the office four hours a day and three times a week.

Mr Mohamed Azmin added that employers need not make separate applications for this but instead should just furnish the staff with a letter of authorisation.

While Malaysia is now under a recovery movement control order, the aforementioned states and federal territories have been placed under the stricter CMCO following a spike of COVID-19 cases.

On Tuesday, the MKN announced that employees at management and supervisory levels in areas under CMCO are required to work from home effective Thursday, until further notice.

CIVIL SERVICE TO ALLOW 30% OF STAFF TO WORK IN OFFICE

Meanwhile, Public Services Department director-general Mohd Khairul Adib Abd Rahman said in a statement that each department in the civil service can have up to 30 per cent of their staff working in the office effective Thursday.

"These measures are taken in order to reduce the presence of employees in the affected areas.

"Department chiefs are to ensure only a maximum of 30 per cent of the federal civil service officers are in the office while also making sure that the services provided by the respective agencies are accessible to users," he said, adding that office presence was only applicable to those deemed as essential services by the department chiefs.

Mr Mohd Khairul added that in line with these orders, all face-to-face activities will not be allowed.

After recording more than 800 COVID-19 cases daily in the past few days, Malaysia reported a slight drop in the number of cases on Wednesday, with 732 new cases and six deaths.

“Of the total, 724 are local transmissions and there are eight imported cases involving six Malaysians and two foreigners," said health director-general Noor Hisham Abdullah said at a press conference.

“Sabah is still the state with the highest number of infection cases, with 535 cases or 73.1 per cent."