Gated & Guarded Community in Malaysia : The Legality Of This Scheme In Non-Stratified Properties by Halim Hong & Quek 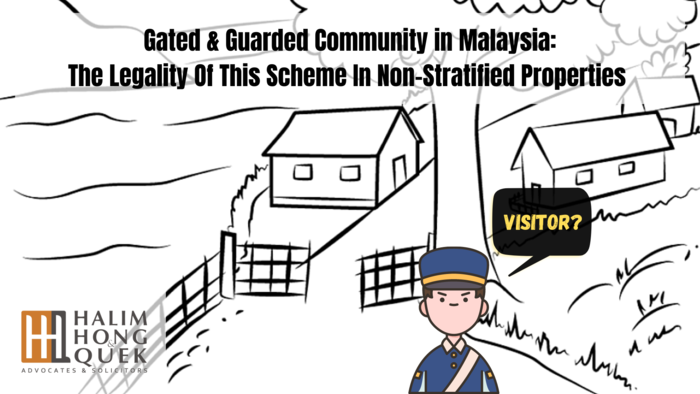 GATED AND GUARDED
COMMUNITY IN MALAYSIA:
THE LEGALITY OF THIS SCHEME IN
NON-STRATIFIED PROPERTIES

The development of the Gated and Guarded Community scheme has become a phenomenon in housing developments these days. The concept of this scheme is mainly focused on the need of having secured and safer surroundings for the community. In response to an increasing demand of providing safety assurance to the community, developers introduced this scheme in most of the development projects which has become one of the main attractions for residents. However, the main question arises here is whether it is legal to be implemented in non-stratified properties? This article provides an overview of the legal position of the Gated and Guarded Community scheme in Malaysia, the application of the scheme as well as issue pertaining to maintenance charges under Deed of Mutual Covenant (“DMC”). 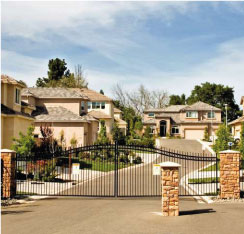 IS IT THEN ILLEGAL FOR THE RESIDENTIAL PROPERTIES WITH INDIVIDUAL TITLE TO ESTABLISH GATED AND GUARDED COMMUNITY WITH BARRIERS TO ENTRY?

Approval granted by the Local Authority

The Federal Court in the case of Au Kean Hoe v Persatuan Penduduk D’Villa Equestrian [2015] 4 MLJ 204 specifically held that the guardhouse and boom gates were constructed legally with the approval of the local authority, namely MBPJ. These structures were granted approval based on the layout plan submitted by the developer. To quote from the Federal Court’s decision, the Court held that,

[19] We are of the view there could be no dispute over the authority of the MBPJ to issue the Guidelines for Guarded Communities and give approval in accordance therewith. The MBPJ guidelines were issued in May 2011 by the Jabatan Perancang Bandar. Under the SDBA the local authority has full supervisory authority over all 'buildings' both at the pre-construction and post-construction stage. Like under the TCPA, the term 'building' is defined widely under the SDBA to include 'any house, hut, shed … gate' (see s 3). By s 70(3) of the SDBA the local authority is the approving authority for the erection of any building. It follows that the MBPJ is the rightful authority for the approval of the guard house and the boom gates as 'buildings' under the SDBA.

The Court further held that the structures were duly authorised structures under the relevant statutes namely, the Town and Country Planning Act 1976 (“TCPA 1976”), SDBA 1974 and Local Government Act 1976 (“LGA 1976”), therefore, the structures could not be considered as an obstruction under section 46(1) of SDBA 1974.

Application Process To Convert Neighbourhood To A Gated And Guarded Community

In 2019, the state governments and local authorities have issued guidelines-- Guideline for Guarded Neighbourhood Scheme.

The conditions to be fulfilled for the aforementioned application amongst others that include:- 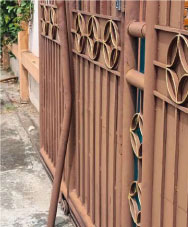 Who is The Residents’ Association (RA)?

In Malaysia, the RA governs the guarded community and undertake to manage the non-stratified properties. It is a basic term for a guarded neighbourhood to establish an association of people to manage their own neighbourhood affairs. Apart from signing the Sale and Purchase Agreement, the DMC is also commonly entered by purchasers and developers, which sets out the contractual rights and obligations of both purchasers and the developer including matters concerning maintenance charges imposed to the residents of the properties. In most of the DMC, there exists a clause which prescribes the formation of the RA to manage the neighbourhood and further, empowers the RA to carry out its obligations as agreed to in the DMC.

As for non-stratified properties implementing Gated and Guarded Community, the RA has the obligation to collect maintenance fees for the security services provided to the neighbourhood. It is subject to the number of residents consented to the implementation of the scheme. In other words, RA is empowered by the law to collect the fees from the residents who agreed to participate in the scheme only.

As for residents who refuse to participate in the scheme, they cannot be prevented from entering into the neighbourhood.

Interestingly in Chow Hau Mun v Majlis Bandaraya Petaling Jaya [2022] MLJU 1324, where the issue is pertaining to the condition imposed by Majlis Bandaraya Petaling Jaya (“MBPJ”) to the RA. The condition was from para 4(d) based on the “Garis Panduan Komuniti Berpengawal MBPJ (Penambahbaikan 2017)”, provided that drivers of vehicles cannot be instructed to get down from their cars to manually operate any barriers.

In this case, the RA imposed the condition that non-members and non-paying members will have to operate the boom gate themselves without the assistance of the security guards. However, the MBPJ could not allow the condition based on the said guideline. The court also found that the condition was not necessary for or conducive to the public safety, health and convenience. The decision of MBPJ was regarded as legal, rational and reasonable.

Although the residents were not forced to pay the security services, the court found that the RA’s conduct of imposing such condition may pressure non-paying members of the residents to pay for the security services. It is to be understood that payment from the residents to participate in the scheme must be done willingly. Their non-participation to pay cannot prevent them from entering into the neighbourhood completely or operating the boom gate themselves when entering the neighbourhood

The Gated and Guarded Community scheme has expanded increasingly following the need to achieve a better and higher level of security in a neighbourhood. As the demand continues to increase, it is necessary to strictly abide by the guidelines and planning as provided by the local authorities in order to meet the objectives of the scheme. Hence, it is important for all parties to fulfil their obligations to ensure the local implementation of the scheme is successful.